When I left home at 18, I knew there was no turning back. My mother’s last abusive tirade of her beating me within an inch of my life firmed my resolve that she’d never lay a hand on me again. I packed what few belongings could fit in my 1979 Ford Mustang (Bumblebee was a pace car for the Indy 500; straight 8 cylinders of pure power), and drove to Yakima, WA, where my maternal grandparents lived. I had often spent my summers with them over the years and it felt like a second home. I was born in Washington and though my dad died when I was young, a part of me wanted to find his family and learn about my dad. What was he really like? Not the jaded recanting’s of a bitter ex-wife (my mother). My mother always said my father hated me and never wanted me. It’s hard growing up believing you’re unlovable and that your existence is a constant disappointment.

But truth has a way of coming out. Anyone hellbent on lying should hope there’s no way the truth will surface. My mother didn’t have such luck. Witnesses lived. Lots of witnesses.

I first contacted an uncle who lived near my grandparents. He was my dad’s best friend and was given the honor of naming my dad when he was born. Who lets a two-year-old name their newborn brother? My dad’s name was Thomas Jerry. Yes, my dad was named after the famous antagonist cat and mouse duo. But I digress. What I learned was that my mother abandoned my older brother and me when I was two weeks old. She’d already found a new man and had no interest in being a young mother. In my mother’s defense, she was sixteen and pregnant with my brother when she married my dad and dropped out of school. In retrospect, she wasn’t ready to be a mom, nor a wife. So, it’s no shock or surprise that she’d felt her life was cut short by her life’s decisions and didn’t want to be tied down to runny nosed children in need of new nappies.

Then my dad died in a horrible accident when I was three. Four days after Christmas. Four days shy of his 27th birthday. Four days after his maternal grandmother died—his favorite relative. Most of Dad’s family had flown to Minnesota for her funeral when he’d passed. A younger brother who’d stayed behind rode with Dad to the hospital. My uncle said my dad had a message for my brother and he refused to share it with me. There was no message for me. No memories. Only one picture of my dad, me, and my grandpa to hold onto as I heard that my father never hated me. He’d fought for custody. My mother never bothered showing up for court. 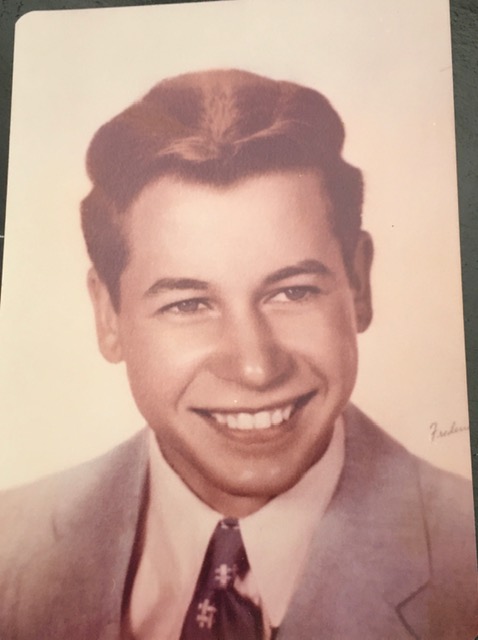 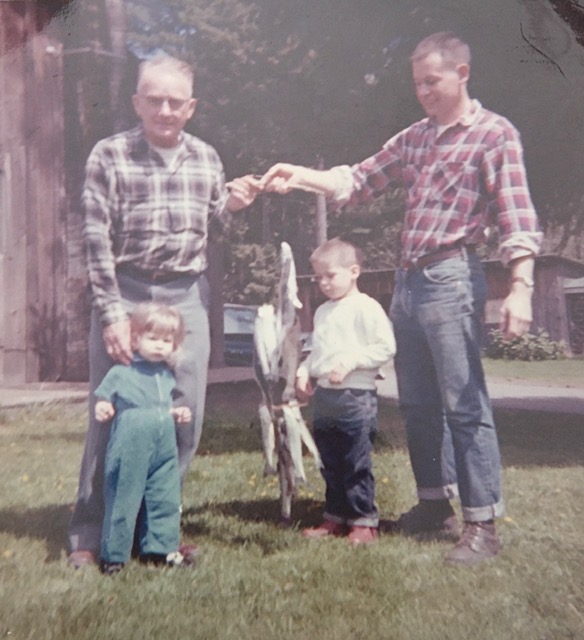 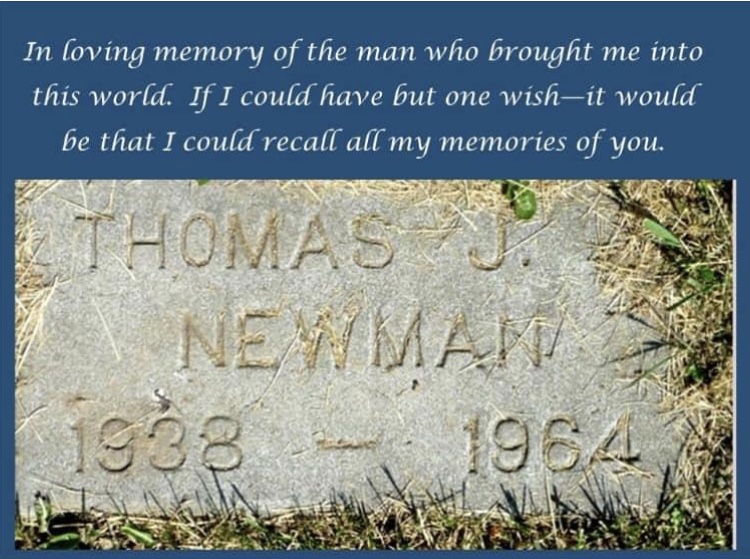 As I remembered the faded pictures my mother had of my childhood it all made sense. My mother wasn’t allowed to see my brother without my grandma being present. There were no pictures of my brother after he was two until he was eight. Well, none in my mother’s family albums. According to family, my father never let my brother have visitation with my mother—because she was more abusive to him than me. He was old enough to remember. Old enough to question my mother’s lies, but when he did, he’d be beat. Eventually, he stopped correcting her. Worse, he questioned his own truth.

After my dad died, my paternal grandparents fought for custody, then my uncle and his wife. Two years we hung in the balance being bounced between relatives. Until one day my mother hired a lawyer and fought for custody. She won. She hadn’t grown up and realized we were valuable blood-tied children. No, she wanted the Social Security money. She didn’t want to have to work. She wanted to party every night at the local pub and we were a means to an end. By then my mom and three of her divorced sisters lived together in a house on Moses Lake (Washington). Our older cousins took care of us while the sisters headed into town to meet men, came home late, and it was the cousin’s job to keep us quiet until the women woke sometime in the afternoon. Eventually, all of the sisters remarried, including my mother.

My stepfather was a kind and loving man that trekked us across the US. First to Montana, then to Indiana—outside Chicago. I’d spend the rest my formative years there in a tight-knit Polish and German community. Stepdad never met a stranger and worked sixteen-hour days to provide for us. When it came to discipline, he wasn’t allowed to intervene. As an adult, I don’t understand how anyone could stand by and watch someone beat their children the way our mother beat us. Though, things were different back then. To spank or physically hit a child wasn’t unusual. Everyone else’s parents did the same thing. It was “normal.” When I left home at 18, I never heard from him again. My mother wouldn’t allow that either.

The last time I spoke to my brother I shared the information I’d learned from the family about our father and that he loved and wanted us. It validated his memories and his life experiences before we lived with our mom. It started him on a slow and arduous path of recovering and healing. It took decades, but in the end, he was in therapy and getting his life back on track, before he too, died tragically in an accident, leaving babies behind.

The more I learned about my father loving me, the more connected I felt to him. I visited his grave. Wrote him letters. And when I’m terrified, I asked him to be near me. To protect me. When I’m struggling and depressed, he’ll appear. He’ll brush the hair off my forehead and try to comfort me. He’ll always be that guardian angel on standby. Too many times, I’ve come close to being hit by another car. Every time, he’s intervened. He’s stalled my car’s engine. He’s helped me gain control of my swerving car when almost being side swiped by a vehicle in dense traffic. He’s even’s stomped on the brakes. All things that have no logical explanation. Yet, I know who’s looking out for me.

Every turn along my life’s path has set me on this destination. It’s not been an easy path, but it’s been my path. My destiny. I’ve always loved writing. I loved telling ghost stories around the campfire. When my kids were young, I wrote them stories. They are heavily plagiarized by using characters from existing books—so they’ll never see the light of day. At least not without a lawsuit. LOL! It wasn’t until I was much older that I wanted to try and write for real. It took years to learn to hone my stories into relatable text that others could read. At first, they were too jumbled and all over the place to warrant sharing in public. Even as a voracious reader, I didn’t quite understand story elements. And I’m thankful for the authors who knew storytelling magic and were willing to teach others. I took classes and I learned. I tried and tried again. I joined a critique group and received valuable feedback that helped me become a better writer. If only one reader provides horrible feedback, it means there will be others. I want to avoid that as much as possible. I’m very thankful for honest critique partners. Now that I have five books written, and a novella, I feel I’ve hit my stride. I have the tools in place in order to write stories that not only I want to read but others want to as well.

In every book there’s a little bit of me on the page. The pain of losing a parent. The pain of being told they’re less than. The pain of never quite belonging. The pain of never being accepted for who they are. The pain of abandonment and how it manifests in detrimental ways. Sadly, none of my life experiences are unique to me. Millions of others have gone through the same thing. I hope that through seeing my characters change that people learn that they too can change. The power is within us. For me, it included years of intensive therapy. Without that, I don’t think I’d be who I am today. 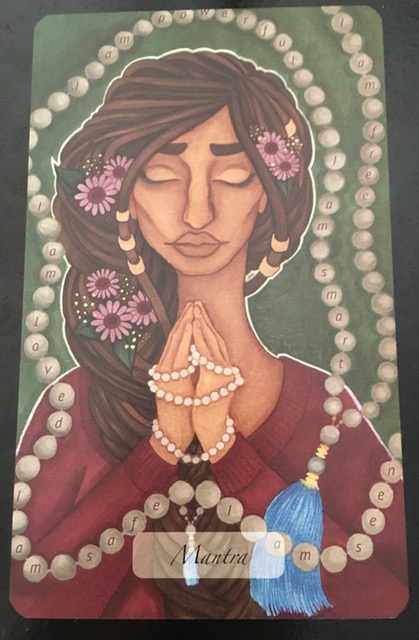 Back in January, when I pulled my weekly oracle card, I received a beautiful message from the Cosmos and the words etched in this card became my mantra. (Card is from the Awakened Soul Oracle by Ethony Dawn)

I am loved (and lovable)

And I added my own.

I am, and always have been, worthy of unconditional love

Every week I write that mantra in my planner. Every week I nurture that part of my soul that needs reminding that I’m not less than, but I’m worthy of greatness. Worthy of being heard. Every week I set my intentions of being mindful that I’m not that little girl whose mother found her worthless and unlovable. That’s all on her. It’s not on me. I couldn’t make her be the mother I wanted, and clearly, I wasn’t ever good enough to be the daughter she desired. That person didn’t exist.

And Happy Father’s Day to all the dad’s, grandpa’s, uncles, step relations, and everyone in between who influences another generation of littles. Thank you! And even if your father has left this plane of existence, he’s still there beside you today—especially when you need him most.

Many blessings until next time!

p.s. If you’d like to join my newsletter and be on the cutting edge of upcoming book announcements—and my personal ghost stories—click on this link. All of my giveaways are now funneled through my Facebook fan page: Aedyn Brooks Haunted Apothecary. Click here to join.