The idea behind Devil’s Due, the third book in my Grave Intentions series, came from what often writers are asked: Write what you fear most. The first thought that came to mind was the demon that inhabited my childhood home. It was back in the mid-60s, when my stepdad left the military and we moved from the freezing temperatures of Glasgow, Montana, to the crowded track homes of Hobart, Indiana, just outside Chicago.

This is what Zillow shows the house looking like today. Built in 1946 for steel mill workers following World War II, it was a whopping 1,046 square feet, but when you’re a kid, everything seems bigger. 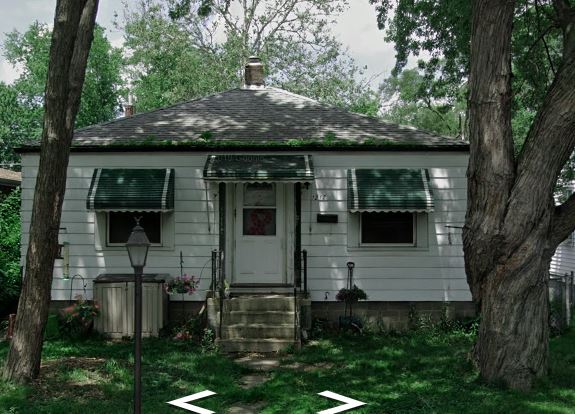 This home still invokes stark terror within me. I hated this house worth a passion and I never felt safe there. Evil lived there long before we moved in.

The windows shown in the picture are the living room (left) and dining room (right). My bedroom was behind the living room wall. It was next to the only full bath. There was a half bath on the other side of the house, where the other two bedrooms were located, after passing through the galley kitchen. After the last bedroom down that back hallway were the stairs to the basement. The demon lived in the crawl space.

The previous occupants before us added two bedrooms and half bath onto the back of the house and thought it would be a good idea to just fill the basement with dirt under the new addition. (Wasn’t that nice of them?) My parents stored Christmas decorations in there.

That twisty tree in front had been hit by lightning almost every year during storms. We would string a pully cable between the two trees on Halloween where a sheet-shaped ghost would swoop down and hit trick or treaters as they came to the door. Yeah, we were that kind of neighbor. Good times.

I remember the first night in that house as if it were yesterday. This was back before smoke alarms, so my parents insisted on us sleeping with our door open so we could smell smoke if the place caught on fire. They were smokers–so maybe this was a real threat. The theory was we would be able to smell the smoke right away and be able to escape. I don’t know if that’s sound logic, but it was the reason I was told that my bedroom door had to stay opened. My bed faced the short hallway that led to the bathroom.

Now, I need to back up here and let you know my mother was a bit of a control freak…on steroids, times a million. I’m pretty sure she invented the saying, “It’s my way, or the highway.” Don’t quote me on that–but I wouldn’t be surprised. The cardinal rules of our house were:

1. The house must remain clean at all times. (This rule did not apply to my parents–see rule #6)

2. Dinner must be on the table at 5:00 PM sharp. If it wasn’t on the table, we went immediately into DEFCON 1, and you knew there was a mushroom cloud on the horizon or the Dinner Police were in route to remedy the situation. Also note I was the family’s cook from the time I was 12 onward. I was in charge of peeling the potatoes and setting and clearing the table when I was six. For my ninth birthday, I was gifted the grand privilege of washing AND drying all of the dishes. That was a gift–I no longer had to tolerate my brother hurting me after every meal while he washed and I dried dishes. I got to do dishes all by myself in peace and quiet.

3. Dirty clothes must go into the hamper.

4. Doors are to remain locked at all times.

5. All curtains must be closed at sundown. “Our house is not a fishbowl.”

7. Children may be seen on rare occasion, but never heard. Keep your mouth shut–or go to your room.

8. Whatever happens in this house, never leaves this house.

Cardinal rule #5 was paramount and critical for our earthly existence. I knew there’d never be shadows on the wall facing my bed, yet there were shadows. Creepy ones shaped like little-horned devils, complete with pitchforks. I wanted to shut my bedroom door so bad but it was verboten. I’d hear footsteps. Voices. Doors opening and closing. Lights or the TV coming on or turning off, on their own. The whole gamut of your classic haunted house. But that wasn’t the worst of it.

Now, I’m not an expert in these things, but my mother was quite the woman. Her temper could be triggered by the littlest thing. Walking on eggshells took on a whole new meaning at our house. I swear she lived to find an opportunity to beat my brother and me every day. Over time, my brother would provoke my mother just so she could beat him and he could then move onto whatever he wanted to. The tension built inside my mother until someone was going to get hurt. Daily. More often than not, it was my brother. I knew my mother had encephalitis as a child and that she’d been in a horrific car accident in the early 60s. Either one of these incidents could have possibly caused permanent brain damage–especially the car accident. We know far more about the lasting effects of brain injuries today than back then. It’s not an excuse, but it’s my way of understanding that my mother could have possible underlying medical reasons behind the way she behaved and treated my brother and me the way she did. It’s easier thinking of that than to face the reality that she never loved me.

If you were to have ever met my mother, you’d never have guessed she was capable of being so incredibly mean and cruel to her children. To the world, she was like June Cleaver. Mother with the moistest and the best hostess this side of the Mississippi. But once everyone else left and we were alone with her–that’s when she’d change. Her personality did a 180 the second the door was closed behind the last guest. You could feel evil rolling off of her like how the barometric pressure triggers your sore joints to ache. I never knew if she was bi-polar or possessed, either way, she was terrifying on every level. In addition to demons dancing on the walls, we’d often be sitting at the kitchen table and the cupboards would slam open and dishes would come flying out. I hated that plastic tub cabinet the most. Those suckers were like clowns getting out of a car–they just kept coming and coming. To not save a used margarine tub was another forbidden rule. Guess who got to clean that up? The poltergeist activity could have been generated by my mother or brother’s issues. (He became as nasty as she was–no surprise really.) There was always this underlying current that someone was watching you. Cold chills would fill a room in an instant and the lights would flicker shortly thereafter. What I hated most was being home alone. This was back in the day when parents didn’t have anyone notifying the authorities if you left your child home for the weekend alone when they were ten or eleven–sometimes leaving the thirteen-year-old in charge. If there was a problem, you could always run to the neighbors. (See rule #8…that was never going to happen.)

The growls and hisses that came from the crawl space were ominous. I kept thinking rats had moved in–but there weren’t any vermin. Whatever evil lurked in those dark, dank shadows, wanted me to know it was there and it was watching. I’d often sit on the front porch and wait until my parents came home. You could hear the demon coming up the cement steps, until it reached the three wooden steps at the very top. Then his footsteps would echo throughout the whole house so loud, you could feel the vibration through the floorboards. He came up every night after everyone went to sleep. It’s a sound I’ll never forget. When I hit my pre-teens, my parents allowed me to close my bedroom door at night. That’s when the demon would know on my door. Knock. Knock. Knock. Always in threes. Never a gentle tap. I never answered the door.

One fall evening, my best friend and I were doing homework in the basement den when the demon made his presence known. Above us, we could hear my mom rocking in her chair, squeak, squeak, and Alex Trebec reading off answers on Jeopardy. Then my dog started barking at the top of the stairs. The folding door to the crawl space area opened. The lights went out. Frigid air filled the room. Something grabbed my friend. She screamed and jumped onto my lap. Neither of us wanted to get up and go across the cold room, in the dark, to turn the lights back on, so we started yelling for my mom. All the while, she rocked in her chair. Squeak, squeak. Squeak, squeak. She finally relented and came downstairs and turned on the lights. The look on her face was the most evil smile I’d ever seen. Her dark eyes were menacing.  Happy we were terrified. The evil laugh that snaked up her throat wasn’t hers but form the demon using her voice.

That’s a snippet of what my childhood was like. So, when I started writing, I knew I needed to finally address the fear of that dark entity that tortured my childhood. That’s why I wrote Devil’s Due. My pulse raced as my clammy hands hovered over the keyboard, pummeling out those first words of the opening scene where Michaela faces Satan. I just wanted to get a feel for that opening scene describing the confessional, etc. When I was done, I looked at the word count: 666. Now, if that didn’t send big willies down my spine! I deleted extra words just so I didn’t save and close that document on 666 words. Nope. Now way. No how.

I knew if I was going to write this, I needed protection. That’s when I started making malas. I needed that extra layer of protection between me and evil. Even if that evil was what I was pouring from my imagination onto a blank page. Now a human being only needs so many malas, right? However, I find beading to be very therapeutic and relaxing. I started giving away some of my malas on my FaceBook readers page Aedyn Brooks Haunted Apothecary. I’d love to have you join us! 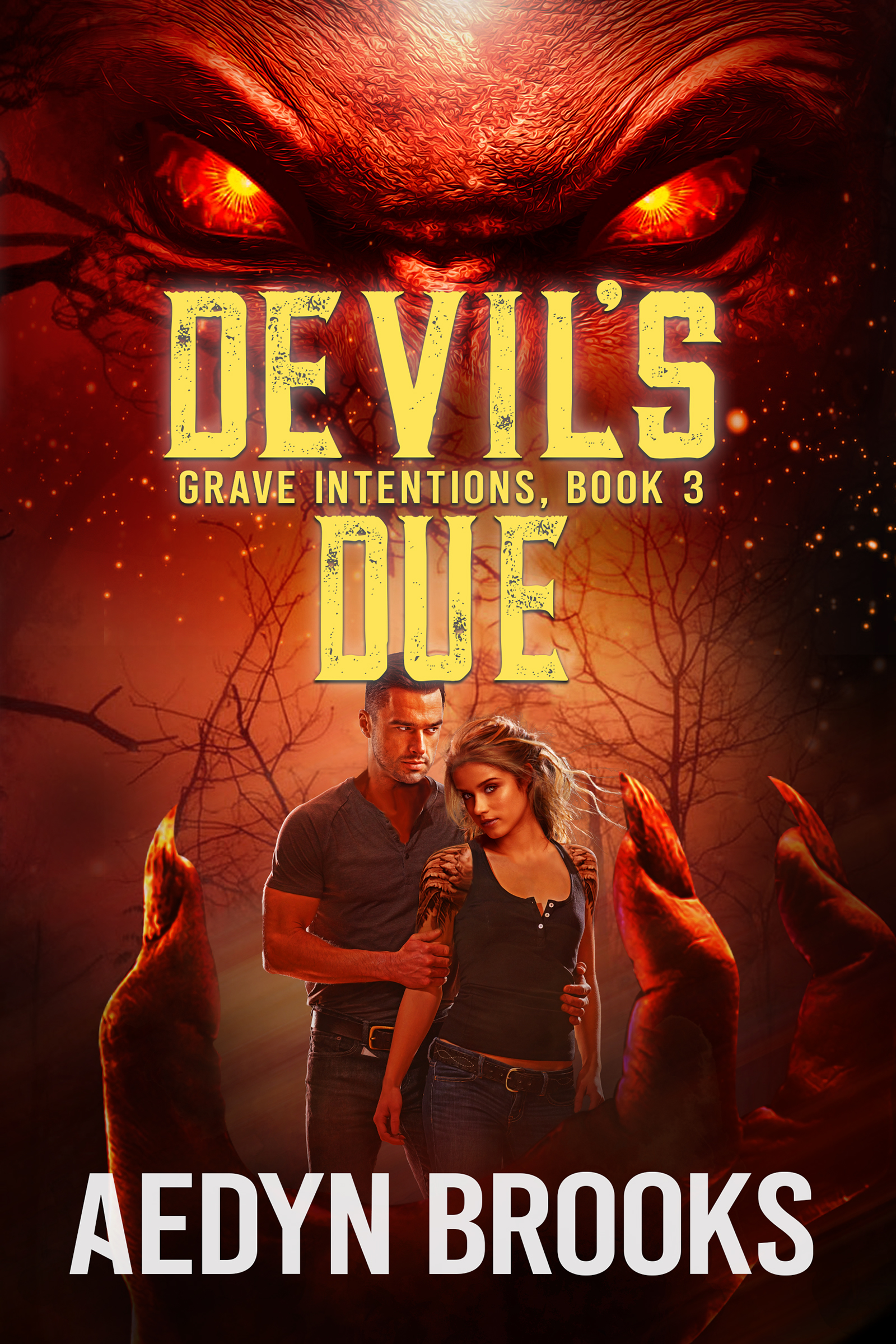